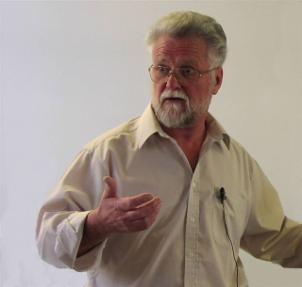 There are very few people who have the strength to change the direction of their lives, it takes an even stronger person to look within - not as others see them, but how they see themselves and to instigate the changes required. David was such a man.

Working his way through life as a Civil Chartered Engineer for various local authorities until his retirement at the age of 50, David was drawn to the world of healing by a road many healers before him have travelled, the one of self healing. Once he had been introduced to healing, there was no turning back, he knew where his future lay. Born just at the end of the war in London his career took him to the Midlands and in 1984 he married his beloved Marion. David and Marion developed their healing abilities and became spiritual healers and were closely associated with the British Alliance of Healing Associations and UK Healers, an umbrella body for various healing associations.

David then went on to be a counsellor and facilitor of various healing modalities and metaphysical studies.

It would have been easy to retire and sit back with Marion doing all the things other retired people do, but they took the opportunity to fulfil their dream to open a healing centre. They sold their home in Hopton and moved to the beautiful hills on the outskirts of Berriew in Mid-Wales which inspired many of the beautiful poems that he published as well as his well received book ‘Opening The Box – A Healer’s Journey’ completed and published just weeks before he died.

Peacehaven is set in six acres, David and Marion began building the Healing Centre and they both created a spiritual sanctuary within the grounds as well as fruit and vegetable plots and for the next 12 years they worked tirelessly to establish it as one of the few healing centres in the region offering an accredited two year Spiritual Healing course. The Healing Centre attracts tutors and healers to come and teach in peaceful surroundings, groups are encouraged to come along for the ‘healing experience’. David also ran meditation and personal development workshops and students travelled from all over the UK to attend. At the time of his passing on 9th July 2009, David had taught hundreds of students, given healing to thousands of people throughout the UK and was one of the Associations most respected healers. Marion continues to fulfil their dream, she on one side and he on the other – but as always, together.